Happy objects is an Australian Design Centre exhibition exploring the value of objects in our lives. We asked Declan Greene to share with us a 'happy object' and tell us a story about this object.

My partner Troy and I have been together for nearly eight years, and we never fight – except about the stuff we put in the house. He wants his home to be a place of solace and sanctuary and peace. I want my home to be filled with living nightmares from the bowels of Hell. A lovingly hand-painted image of a grimacing clown. A taxidermy rooster with a broken neck. All things that are irreparably fucked-up, but fucked-up in a way that gives them a totally unique aura. I found this doggie at a market in country Victoria and was consumed by love or pity or both. Its cute puppy-dog eyes. Its scabbed-off paint-skin. Troy hated it. He put his foot down and said that this was the limit – we would NOT have this monstrosity in our house. I’ve accepted his ‘no’s’ before, with varying degrees of sulkiness, but I begged him to let me buy this one. Eventually he relented. I don’t know why it felt so important to me. Leaving it behind felt cruel, given all it had already survived. Eventually Troy came to love it, as he has most of my cursed objects. Except the taxidermy rooster, which turned out to be riddled with worms. 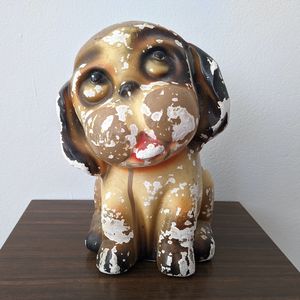 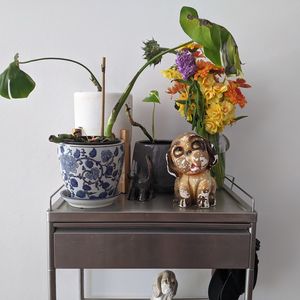 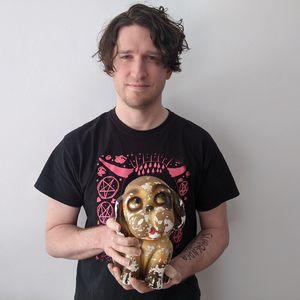 Declan Greene is a writer and theatre-maker and is the current Artistic Director and CEO of Sydney’s Griffin Theatre Company.