Yul Scarf (NSW) is a multi-disciplinary artist motivated by radical political change. For Yul, clay demands a conversation about land, First Nations sovereignty, appropriation and theft. Their commemorative ceramic objects interrogate the colonial structures we inherit and the futures that are possible in the ruins. 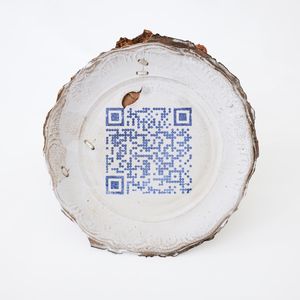 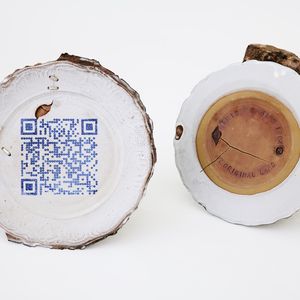 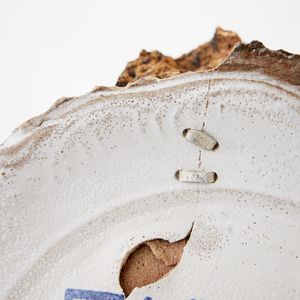 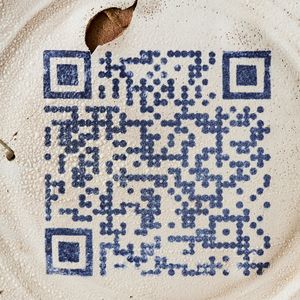 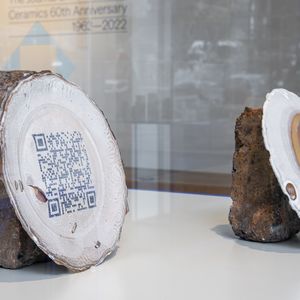 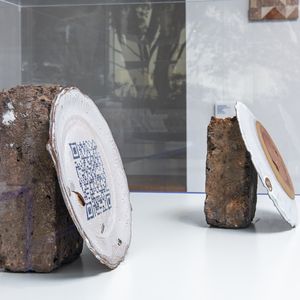 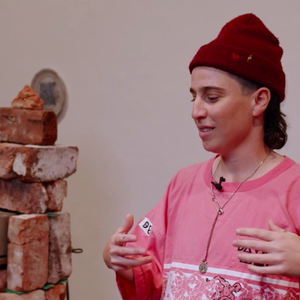 Exhibition work: SORRY DAY/ SMALL CHANGE, 2022, broken ceramic plate with functional QR code, made from Lands found in a bucket on Gadigal Country, mended with staples made from 5 cent coins, supported by convict era bricks made on Dharug Land.

On National Sorry Day in 2020, Rio Tinto announced that it had blown up rock shelters at Juukan Gorge, indescribably sacred sites of the Puutu Kunti Kurrama and Pinikura people. The rock shelters and connected waterhole were places of continuous culture, connection and protection for over 46 000 years, or since time immemorial. The intentional blast was to extract iron ore.

Despite a Senate inquiry into the destruction at Juukan Gorge and the release of a findings paper called ‘Never Again’, law still favours the priorities of large mining operations over the authority of Aboriginal and Torres Strait Islander people on their own land.

In SORRY DAY/ SMALL CHANGE, Yul utilises the ubiquitous QR code to link to Rio Tinto’s own messaging about the disaster. One year on, the multi billion dollar mining giant presents itself at human scale; reckoning, mourning and repairing. But what does the corporation seek to repair other than its own reputation?

Apologies can be cathartic. They can offer renewal, release and systematically shift the dynamics of relationships. However, apologies can also be used- by people, governments, corporations- like magic. A well choreographed gesture with a handkerchief to disappear the urgency for full scale revolution, without really changing a thing.

5 cent coins- like the ones cut up and turned into staples to fix this broken plate- are hardly used as currency anymore. Soon they’ll be relics. Pulled out of circulation and stuck in jars, repurposed or returned to the ground. A future archeologist or interpreter of the past will contextualise coins they find with the following:

“These objects of the late Capitalocene were undervalued at the time of their circulation. They were not assessed as an intrinsic part of Country, nor for the energy required to extract Country from itself. Instead these small, dense compositions were traded within the colony as symbolic tokens representing a promise. Commoners called these objects ‘shrapnel’, or ‘small change’.”