Australian Design Centre plays a critical role in celebrating the work of Australian artists who embrace the highest degree of skill and who continually explore material, process and ideas to advance contemporary craft and design practice.

Object Space is a window gallery located in the window of the ADC Offices on William Street in Darlinghurst. The exhibition space has direct street frontage, is accessible to view 24 hours a day and is lit for viewing at night.

The Miner’s Wife is inspired by a Coober Pedy tradition - the miner’s wife gets first pick from the quarried opals. This work illuminates the seductive beauty of the black opal. Appliqued in Asian silk and satin shapes layered over matt black vintage linen, the piece is drenched in celestial hand sewn glass beads, mimicking the fiery colours of opals.

Opals are prized the world over and legends speak of their origins and supernatural powers. In Arabic folklore, the Bedouins of the Sahara liken opals to flashes of lightning. Believing they fell from heaven during storms with lighting trapped inside them, they became known as ‘thunderstones’. Opals in the Spanish court of King Alfonso XII appeared cursed after a spate of fatalities gave them the reputation of bad luck, and closer to home, opals appear in Aboriginal Dreamtime stories. 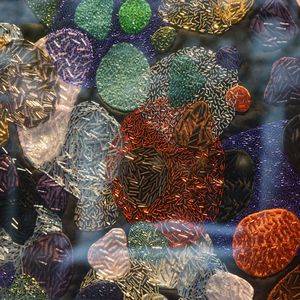 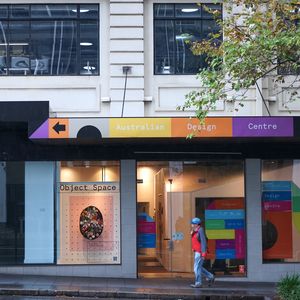 The Miner’s Wife: A fictional tale of the black opal by Soraya Abidin.

Shahnaz was a sweet-scented woman with striking blue-black hair set in thick buoyant curls. She wore a pale pastel dress with a shiny white belt cinched at the waist and peep-toe heels that elevated her slender body to a goddess’s height. Her flushed rosy face was sprinkled with freckles, eyes dark as night, perfectly contoured with kohl and shadowed in Arabian blue. Her attention to detail may have gone unnoticed by those around her, but to Shahnaz the rituals of glamour were always to be performed.

Seeking remedy, he and his wife travelled to Australia to live in the far north-west. Malik worked the mines tirelessly in pursuit of the black opal. Retreating to the depth of the mine pit was an escape from the haunting memories of war.

The plight of those who seek the stones were the subject of many hours of gossip within the tiny township. The arrival of this foreign couple did not go without mention.

In the blackness of the mines, Malik was guided by the voice of his ancestors: ‘The small fruit is abundant, but the black opal has the power you seek, possession of this divine gemstone will bear the fruitfulness you and your wife yearn for. Search Mother Earth day and night in preparation for your family.’

It was rumoured that a momentous lighting strike in a volcanic storm will unearth this wondrous creation. The unusual darkness of this gemstone bestowing the power of foresight and prophecy captured in its rainbow of colour.

Willing the gemstone to appear, Malik stared at the sky day and night. He knew it was best to seek this stone after such a storm, when the earth is deeply weathered and divinity is released into the groundwater, when it is quieter and the voice of Mother Earth could be heard:

‘With the thickness of five million years my precious layers commence to form.

I will play with you in the fields of coloured diffraction through the cracks of visible light.

Contained in my voids is the porosity of my past, I must carefully provide for you and fill your fissures.

Follow my seams through the myriad of colourlessness to the matrix of opalised confession.

I am your rainbow talisman and bearer of fruitfulness. The god of love.

I gift you the sun of October.

Gift my opal to the Miner’s Wife’.

Malik watched and waited for the colossal storm to come. One starless night the songbirds were silent, the ants moved quickly as the western winds began to whine and a darkness swallowed the sky.

A moist acidic taste filled the air as Malik made his descent into the darkness. Led by a glittering stream of new groundwater lighting the path, he ran his hands along the soft layers of fresh earth and followed the travelling echoes of thunder. The volcanic storm built to its crescendo. Its final thunderous strike filled the mine’s chamber with a pure light, illuminating rock walls laden with vines of small fruits that climbed and cradled the blackest of black opal, blinding with colour.

Anxious for his return, Shahnaz waited for Malik to ascend. He arose and opened his hand revealing the brilliant gemstone. The shape of an almond and still carrying the warmth of creation, Shahnaz looked at her husband and opened her mouth. He placed it on her tongue and she closed her eyes and swallowed deeply as the smooth stone slid down her throat.

Her eyes now open, they mirrored an iridescent rainbow of colour and that night their fruit began to grow.

Soraya Abidin is a contemporary textile artist from Sydney. Soraya’s practice explores the notion of inter-culturalism through commonalities of beading, embroidery and quilting practiced by her Malay and Australian ancestors. Recent work criss-crosses her heritage as she switches between cultural frames, techniques, and materials.

Soraya’s textile practice continues to explore the significance of ‘light’ in cultural lore, often considered a metaphoric source of enlightenment and universal guidance connected to the creation of the sun, moon, stars and galaxies.

Soraya’s work has been exhibited and published nationally and internationally. Most recently she exhibited in the Australian Muslim Awards 2021 at the Islamic Museum Australia and currently has work on tour in Tension(s) 2020, for the Tamworth Textile Triennial.