How do you start a ceramics collection? Tips on collecting for beginners, how to collect from galleries and how to make a collecting group.

Brett Stone worked at Rex Irwin Art Dealer for 25 years and in this role, he encouraged the blossoming of many emerging artist’s careers, and helped build many private collections. Now he’s a part-time potter, helps run Claypool studios and works at Utopia Art Sydney dealing in contemporary Australian art. 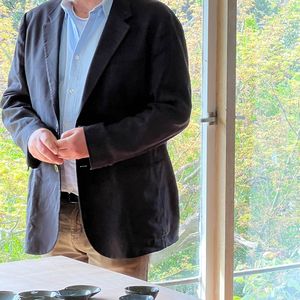 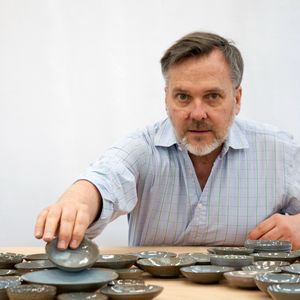 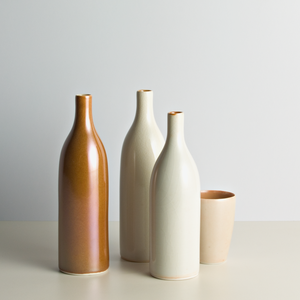 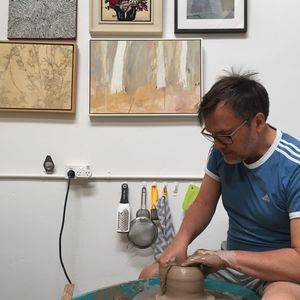 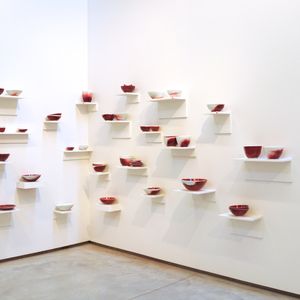 Brett’s career began in Perth in a mining boom of the 1980s. Armed with a geography degree and a secretarial college degree, Brett says, “I could type, I could draw a map, I could drill holes in walls.”

He then moved to Sydney to work with Rex Irwin Gallery in 1987.

Brett says that because Rex Irwin gallery was a ‘general gallery’ and not specialised, it was one of the first galleries where collectors saw ceramics exhibited in a commercial sense.

“A lot of people who were big collectors and had never bought a ceramic work as a work of art, bought a Gwyn Hanssen Pigott. And then they went on and bought other things.

Brett offers a completely new angle on this phenomenon - “the rise and rise of the Danish sideboard.” He describes how the trend of minimalism all changed in the 1990s and 2000s, and suddenly “ shelves were back. And as soon as shelves were back, then it was ok to start collecting. “

Brett confesses not to own a Danish sideboard himself but his living is lined with shelves that hold ceramics.

Brett says he has a couple of Gwyn Hanssen Pigott pieces.

“I have a very special one which is only a small still life, but it was from a firing that she did, that I actually went up and helped her pack the kiln.”

Other items in his collection include things he’s been given, has swapped with other artists and “a lot of things that weren't that expensive, but mean a lot to me.”

He rarely makes single bowls, and instead sells them in stacks. Gwyn Hanssen Pigott taught him about putting things together.

But if you put two bowls on a table next to each other, what your mind does is go, ‘Oh, look at that. That one's slightly different to that one. Look at how they work together and look at the space between.’”

Brett rearranges the bowls in his collection, and ‘plays’ with them, like stacking four people's work together.

“It's just a great way of interacting with the collection rather than it just being a static thing on a shelf.”

What do ceramics collectors look for? (5:26)

“There are some amazing artists out there at the moment,” Brett says, such as Ebony Russell, Ramesh Mario Nithiyendran, Glenn Barkley and Prue Venables.

“There are still the traditional wood firers that manage to imbue an amazing thing that's just theirs, like Sandy Lockwood. There are people working with other artists like Neville French working with Belinda Fox, and if you go out there and have a look, there are ceramic artists that are pursuing this path that either no one else in Australia has taken or even, like Juz Kitson, no one else in the whole world.”

Clay Dynasty celebrates studio ceramics in Australia as shaped by three generations of makers: from the 1960s pioneers who transformed the functional pottery tradition to contemporary ceramic artists who continue to push the medium. It’s the first major exhibition to chart the astonishing diversity of ceramic practice across Australia, with more than 400 objects from the Powerhouse’s collection.

SIXTY: The Journal of Australian Ceramics 60th Anniversary 1962–2022 is a special ADC On Tour exhibition project presented in partnership with The Australian Ceramics Association to acknowledge this significant anniversary. It is guest curated by Anna Grigson and ADC’s Lisa Cahill with design by Studio Garbett and video by Jane Curtis.

Tips on collecting ceramics for beginners (7:07)

For Lisa, one of the great strengths of commercial galleries is that for an audience member, the shows are two or three weeks and they turnover very fast.

“So there's always something new to see, and in three weeks time go back to that same gallery again and see a completely new body of work. That's a great way to build your knowledge and, and educate yourself as an interested art goer.”

Tips for collecting ceramics from galleries (8:42)

How Gwyn Hanssen Pigott worried that people wouldn’t use her work (12:58)

Brett tells the story how Gwyn Hanssen Pigott got very depressed when she thought, “People aren't going to use my work anymore. I'm going to all this trouble to make a beautiful bowl to eat out of and people think these bowls are too expensive to use.”

Gwyn would always love somebody who met her at an exhibition and said, “I bought one of your bowls thirty years ago, and I eat my Weet-bix out of it every morning.” And she would give them a hug and say “Thank you.”

Brett says that Gwyn had a great hesitancy about putting any of her work in a perspex box on a plinth because she didn't want it to become this cold, sterile thing.

What’s the difference between production pottery and ceramics as an artform? (13:45)

Brett says that production potters do great and valuable work as an entry point for collectors - whether those production potters are at markets or selling their ceramics through a florist, gift shop or the state gallery bookshop.

“That may be the introduction and the price entry point for a lot of collectors who then may think, Oh, this person makes these cups that I have, and they’re having an exhibition. Maybe I'll go and have a look at their exhibition work as well.”

Potters can balance the two, with their production work paying for their exhibition work.

“The harsh reality is it's very hard to make money as an exhibiting potter alone. Often their career is supported by teaching, or they live in the country where their cost of living is much less or whatever.”

For Brett, “the division between production and exhibition pottery, it's a valid one, but for a lot of collectors, I don't think it's a question that comes into their mind.”

Brett suggests that forming a collecting group with friends who have similar or not similar tastes is another way to collect ceramics.

“They can be as formal or informal as you want. Sometimes, I’ve done it with people where there's been a set of like six bowls and there's been three of us. We thought, none of us can afford these six, but if we bought two each we can. So we bought a set and we borrow each others to have a dinner party.”

Another way to run a collecting group to is to agree on certain amount per each, per year and for a set number of years. It could be a small amount or it could be $1000 a year. And then between you, you buy a more substantial work a year, and at the end of the ten years, you'll have ten works of art, which you've all taken turns living with.

Ceramics artist and teacher Jane Sawyer is a member of Bluestone, a collecting group started in 2010. It was founded by a group of craftspeople in Melbourne with the aim of collecting contemporary craft and donating it at the end of a ten year period to an institution.The members “recognised that institutions were not collecting our contemporaries' work, as much as we felt they should be.”

At the end of their first collection, the collecting group had 21 pieces which they donated to RMIT Gallery in Melbourne. Jane says this gallery was “a perfect place for us to be because for those pieces to be because they're on display, and they're used as research by people who are studying art and researching art, which is great. It's a snapshot in time.”

Each member contributes $300 a year, “which is not a lot in the art world, but gives us a few thousand dollars a year to play with,” Jane says.

“And then we get together and we have wonderful discussions about what we're going to purchase. And it's broad craft. There are a lot of ceramics, but there’s also a lot of jewelry and some beautiful metal, leather, and wood.”

Another way of being involved in collecting which a lot of people don't think about is to join one of the public institutions For example, [if you’re in Sydney] you could become a member of the Powerhouse Museums’ Ceramic collector's appreciation group.

Brett says you could start a relationship with a curator and they may say, “There’s this wonderful thing we want to buy, but we don't have the money.” You could say, Look, here's $50, here's $5000. Your name will end up on a plaque. You don't collect it yourself, but you've been a part of supporting an artist and building a collection.

Tips on documenting your collection (21:00)

“Unlike a drawer or a painter or even a photographer, you can't really do pottery on your living room table,” Brett says. “It's messy and you need a kiln and you make a mess, and you need somewhere to recycle your clay and somewhere to keep your glazes.”

“So as property prices in Sydney increased, ando as every second warehouse in the inner city was being bulldozed down to make a block of apartments, in my gallery world, I realized that a lot of artists were having to move either out into the suburban fringe or Newcastle Wollongong, Blue Mountains to get somewhere that they could have a studio.”

At the same time as this was all happening, Brett says that a lot of ceramic artists were enrolling perpetually in TAFE to get studio and facility access.

He co-founded Claypool nearly ten years ago and now they have sixty members.

Brett finds that people who are collectors want to know more about ceramics, and will then enroll in a class and then come become members. So often someone who's been a collector of ceramics becomes a really good potter because they've been holding other people's work. They've been looking at things and thinking, "This is what a good bowl feels like, and this is what a good bowl or a good sculptural work looks like".

Object is a podcast of the Australian Design Centre. We'd like to thank Visions of Australia, the Federal government’s regional exhibition touring program for funding support towards this podcast.

Object is produced by Jane Curtis, in collaboration with Lisa Cahill and Alix Fiveash. Sound Engineering is by John Jacobs.

Return to Object: stories of design and craft main page